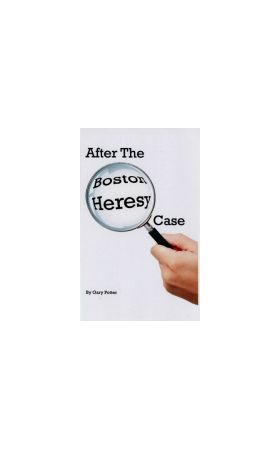 To go after something is to inquire into it, to be in search of it, to seek the truth about it. In this book, veteran Catholic journalist Gary Potter goes after the truth concerning one of last century’s principal religious controversies, the so-called Boston Heresy Case, and its chief figure, Rev. Leonard Feeney, S.J.
The most famous Jesuit of his day, Fr. Feeney broadcast on the radio, his books were best sellers, his poetry was mandatory reading in parochial schools. Suddenly, newspapers throughout the country were reporting that he was charged with heresy, expelled from the ranks of the Jesuits, and even “excommunicated.” Now his verse was removed from textbooks and Catholics were forbidden by high Church authorities to have any association with him. Scores of young men and women, students of Saint Benedict Center in Cambridge, Massachusetts, defied the ban. On Sunday afternoons, they accompanied the famed cleric to Boston Common, the public park where he took to preaching when he was denied a pulpit. Leading magazines labeled him the “hate priest” on account of his preaching.

Did he hate? Was he excommunicated? Was it because he preached that outside the Catholic Church there is no salvation? Gary Potter sorts the facts from the myths and the result is more than the true story of Fr. Leonard Feeney and the “Boston Heresy Case.” As Fr. Dennis P. Smith describes it in his Preface to the book: “In an era when our Catholic people and prospective converts are being force-fed on a starvation diet of watered-down doctrine and junk-food liturgy, Gary Potter has provided a banquet for the heart and soul."

Gary Potter is a native of California. After attending public schools, a professional theater academy, and college, he spent two years sailing in the Merchant Marine and another four living in France, where he discovered the Faith. Following baptism into the Church and time working in advertising in New York, he began his career in Catholic journalism in 1966 as a founding editor of the legendary Triumph magazine. Besides Triumph and two publications of which he later was editor, Truth & Justice and CCPA News & Views (the publication of Catholics for Christian Political Action), articles by him have appeared in National Review, Human Events, the New York Times, the Washington Post, The National Catholic Register, Faith & Reason, The Wanderer, The Remnant, The Angelus, From the Housetops, and numerous other publications. Mr. Potter lives with his wife, Virginia, in Washington, D.C.

Since After
When the Church weighs the merits of a servant of God to judge whether he is a fit candidate for canonization, she will examine any writings he left behind, but only his writings. She does not concern herself with anything he may merely have spoken. We can understand why.

Spoken words, even ones delivered in a public lecture from a prepared text, are subject to revision, and that even if the text was prepared with a view toward eventual publication. That is because before it actually is published, the author of the words may have second thoughts and change them. In contrast, when it comes to words that are written specifically for publication—words for a book or article, or even a letter, it is to be presumed the author has had his second thoughts. He has considered and reconsidered the words. This is his final say.

That does not mean, of course, that an author might not wish he had written other words when he sees his book or article in print and it is then too late to change anything. This is as likely to happen as the perfect witty remark coming to mind only when we are on the way home after leaving a party.
It was the case with this writer as soon as After the Boston Heresy Case was originally published. Later, I would even have been happy to write a whole new book. Why? Because I had come to know so much more.

It was not new facts about the “heresy case” that I came to know. Rather, I had grown in knowledge and wisdom, as will anybody who works at it, who reads, studies, meditates, stays open to experience, and is reflective enough to learn from it. In short, I believed myself to be a deeper man. A deeper man would write a deeper, better book.
In any event, when Loreto Publications told me they wished to bring the book back into print and invited me to consider what changes I might care to make, I thought, “Here’s my chance.” It was the first time in a half-century of being published that I’d been given such an opportunity. I saw it like the rerun of a conversation where I’d be able to say exactly the right thing.

Of course there was no question of writing a whole new book. Short of that, what would I delete, add, rewrite, or change?
The reaction of readers could guide me, I decided. It seemed a natural decision. Since the publication of After by Catholic Treasures, the original publisher, I had heard, I suppose, from hundreds of them. What had they told me?

Not much, I finally realized, not by way of offering guidance now. That doesn’t mean I wasn’t gratified by what they did say. Whether by letter, phone, e-mail or in face-to-face conversation, most were kind enough to express thanks for the book, but little more than that. To be sure, it was more than merely gratifying to hear from some that reading After was instrumental in their coming into the Church or returning to her.

Naturally, there has also been criticism, but not much, and none really substantive. I want to say that soon after the book’s original publication, Br. Thomas Mary Sennott of Saint Benedict Abbey in Still River sent me a letter, not of criticism, but with a dozen changes or corrections he suggested for any possible future edition, like the present one. I mention this because I had deep respect for Brother, and his book, They Fought the Good Fight, (recently reprinted by Loreto Publications) was personally important to me, and, indeed, a source for my own. His letter mattered. Alas, it is now lost. How it came to be, I don’t know, and Brother himself is now deceased. However, he was a scholar, the kind who would have flourished in past ages when his kind reveled in the proverbial argument over how many angels could dance on the head of a pin. If any of his suggestions were for changes of more than detail, let alone imperative, I am sure I would remember.

There were also persons, former members of Saint Benedict Center, who had urged changes or the inclusion of material they wished to provide, but these changes were ones having to do with matters important enough to them that they broke from the community. I might say, important only to them, since everyone else stayed.

Would it really produce a better or more complete book if I now ventilated the reasons why these individuals left? I decided it would not, no more than it would have done when I first wrote the book to dwell more than I did on the personal and other differences that produced the various branches of Saint Benedict Center.

Speaking of the various branches, Loreto Publications notified all of them that they were bringing the book back into print and asked if anybody wished to suggest changes. A few suggested minor changes, and they have been incorporated.

In sum, without readers having expressed to me little but thanks, and with only minor suggestions forthcoming from today’s M.I.C.M., I finally decided to change almost nothing. As I’ve said, I am sorry I am not writing the book today instead of when I did. I think it would now be a better book, with some things said now omitted and other things emphasized more, but I had my chance. The book that exists, this one, is what it is. “The moving finger writes, and having writ moves on...”

So does time, and with it human lives, even to their end. A number of persons who figure in the book are no longer among the living. Avery Cardinal Dulles is gone. So is Br. Dominic Maria (Temple Morgan). More integral to the story of Saint Benedict Center and the M.I.C.M., three persons who were superiors of Center branches when the book was written have passed from the scene. The sisters at St. Anne’s House have mourned the passing of Mother Teresa. Abbot Gibbs of Saint Benedict Abbey has departed, but not before producing his own excellent history of the Center (Harvard to Harvard), and also not before visiting Br. Francis Maluf of the Richmond Center in the latter’s last days.
Br. Thomas Augustine also called on Br. Francis and attended his wake.

If those visits could not eradicate old ruptures, anymore than words printed in a book can be made to disappear by a new edition, they did make for reconciliation. The reconciliation makes it possible to believe that although the various SBC branches will continue along the lines of the apostolate each has made its specialty, it will be in a greater spirit of cooperation.

There have been other developments. Br. Thomas Augustine’s community in Still River is now fully “regularized” with the bishop’s blessing in the Diocese of Worcester. More recently, the Bishop of Manchester, New Hampshire, formally recognized the chapel at Saint Benedict Center in Richmond as a place of Catholic worship, thus acknowledging that the faithful who attend Mass there are fulfilling their religious obligation on that score. Implicit in this recognition is of course what was made explicit in the earlier discussions with the Congregation for the Doctrine of the Faith, through the good offices of the Diocese of Worcester, and quoted in my original Introduction. In a word, there is no more talk anywhere, except among the uninformed, of “Feeneyites” being in schism.

There cannot be, first because the M.I.C.M. never were guilty of it. Beyond that, however, it ought to be noted that in the first book he published after assuming the Chair of Peter, Jesus of Nazareth, Pope Benedict XVI reaffirmed what the M.I.C.M. and Saint Benedict Center have always upheld: that there is no salvation outside the Church. If Jesus of Nazareth is not a formal teaching document, and though Pope Benedict does not invoke the ancient formula extra ecclesiam nulla salus, he is very clear—clear enough, evidently, for subordinates to understand that the religious in Still River and Richmond are nothing except Catholic. If they are not exactly of the mainstream as it still largely exists, their years in the wilderness are over.

All Catholics serious about the Faith, and also the remaining ones who seized on Vatican II to direct the Church in strange directions, are aware that under Pope Benedict, the Church is becoming more fully herself. The vindication of the M.I.C.M. may be seen as a detail in this great turning, and in this world it may never be known how valuable the work and sacrifices of Father Feeney, Sister Catherine and their associates and followers have been in the economy of Heaven, but it is hard to believe they counted for nothing toward the renovation now taking place. I’ll go further: It is impossible not to believe that if God wills the advent one day of a Second Christendom, as surely He will, the M.I.C.M. will have contributed to it. After all, for many years they were virtually alone among religious orders in this country in keeping alive the memory of the first one.
Feast of the Epiphany, 2011