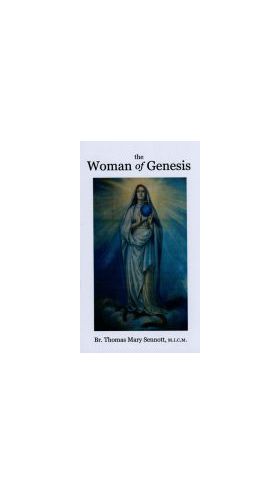 Originally published in 1984 This short book brilliantly exposes the "higher criticism" which purports to undermine the true Catholic reading and meaning of Genesis 3:15. See how Br. Thomas uses the fictional character Maria Stephan to 'step on' and crush the ridiculous arguments of the modern Catholic and protestant so-called biblical scholars.

The dialogue with its two protagonists is fictional, and the dialogue form makes more readable the position of a typical Modernist exegete and the reply of an orthodox Catholic. I can well appreciate the wrestling it took to present a coherent statement of both sides. ,The Woman of Genesis, is very successful in this. The results for a sincere reader would be to fortify the role of Mary in our salvation and in the Heilsgeschichte that seems to be reaching a climax in our own day.

What is good about The Woman of Genesis is not only the particular points which it makes on the question of the Protoevangelium, but also the solid principles on the larger biblical questions that it inculcates throughout. Today the bible is not under critical study, it is under attack. Rather than refute them we must repel the attack.

Br. Thomas Marys writing is delightfully unassuming and lucid. It is addressed to the simple faithful whose faith, in these days, must needs be tried and bewildered. The Woman of Genesis offers them a measure of peace and comfort. There once were times when the Shepherds of the flock spotted the wolves and called them by their name. It was a necessary and urgent service. We should acclaim any effort, powered by grace, which undertakes this service today.