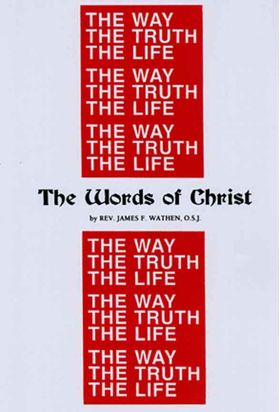 You and I did not have the good fortune to hear Jesus speak to the men of Israel. But this is only a minor disadvantage—we need to be humble enough to admit that, probably, we would have been among those for whom His words seemed too hard; incredible. (Indeed, we might have been among those thousands of others who never troubled to go to hear Him at all, either out in the “desert places,” or just down the street.) What is important is that today we have His words; we know what the Lord said! And we need have no hesitation about accepting the Gospels as a perfectly reliable transcription of His message. This is not to say that we have all the words He ever uttered; the world would not be able to contain the books that would have to be written (Jn. 21 :25). Rather, we have those He wished us to have, and those we have in the Gospels are truly His.

Over a hundred years ago, there began among both Catholics and Protestants what is referred to as “The Scriptural Revival.” For a variety of reasons, which we need not list here, more scholarly attention began to be given to the Bible. A formidable scholarship developed, and the Sacred Books began to be the subject of study from seemingly every possible angle, which is to say that every branch of learning seemed to wish to contribute something to the effort. Should anyone wish to read about this revival, he may consult Pope Pius XII’s Encyclical Letter, Divino Afflante Spiritu. In the Church, it was hoped and presumed that the increase in enthusiasm for the Scriptures would have the end result of helping the faithful (to quote the Pontiff) “more fully to know, more ardently love, and more faithfully imitate” the Author of the books and of our salvation. There is ample evidence to show that this hope was not realized. The very opposite result can be observed; probably even measured. The faithful use the Bible less now than they have done since printing began. We have a suspicion that biblical scholarship is one of the causes responsible for this, among many others. What happened was that the noble study of Exegesis (and those subsidiary to it) went astray. It became lost in every sort of irrelevance, esotericism, and pedantry. Students of the Scriptures, most of them, sought to become theologians (without mastering theology), ideologues, and reformers. We ourselves have heard some of these people pontificate on the most controversial of secular matters, supporting all their contentions (eruditely, they seemed to think) with biblical chapter and verse. Worse still, they gave the impression that they judged that every verse of Holy Writ needed to be re-translated, every “version” revised, and every traditional reading “adjusted.” So awesome was the task that the ordinary Catholic would be committing the sin of presumption, should he venture to read God’s Holy Word before it had been “restored” to its original meaning and expertly commented upon by one properly qualified. As a consequence, a general timorousness exists among the faithful. They doubt the inerrancy of the Scriptures, and they imagine that they are too ignorant to profit from it, since, they have been given to believe, they would probably misinterpret what they read anyway.

The contrary, of course, is true. The ordinary Catholic can find great solace and inspiration through reading the Bible, particularly the New Testament, and especially the Gospels. His layman’s knowledge of the Faith is quite sufficient as background for his being able to understand and meditate upon the Divine Message.

Nor is it wise for anyone to suggest that the men of old, sincere though they were, were either too poorly trained or too inadequately equipped with the tools of modern science to be able to preserve most carefully the Word of God as it came to them from the hands of its human authors. As Pope Pius XII said in the encyclical already mentioned: The Church “received it intact from the hands of the Apostles, so she kept it with all care, defended it from every false and perverse interpretation, and used it diligently as an instrument for securing the eternal salvation of souls, as almost countless documents in every age strikingly bear witness.”

This is in no way to cast aspersions on those "men of the Scriptures" who have not fallen victim to the erroneous inclinations described above. Nor, needless to say, is it in any way to derogate the exalted study of Exegesis; no one who would do such a thing would dare refer either to St. Jerome or to Divino Afflante Spiritu. lt is simply to remind readers that, just as one does not have to be a Speedway mechanic to drive an automobile, neither does one need a doctorate humbly to "take up and read" God’s Word. No one need fear putting the scholars out of business; there will always be plenty of work for them. The Scriptures are an inexhaustible treasure-trove of revelation, mystery, and wisdom; and the people need the fruits of scholarly learning and research. But, mainly, the scholar’s work is on "fine points," facets and minutiae which few can begin to appreciate. Rather, this is to encourage everyone to resort to the Scriptures as the ideal book of devotion, instruction, and moral guidance which it was meant to be.